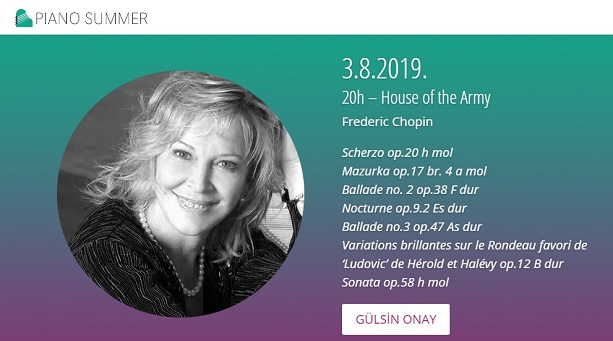 Gülsin Onay’s truly international career has spanned 75 countries across all continents, from Venezuela to Japan. Gülsin Onay has given concerts in the major musical centres of the world such as Amsterdam’s Concertgebouw, the Berlin Philharmonic Hall, the Vienna Konzerthaus, London’s Queen Elizabeth Hall and Wigmore Hall, the Salle Gaveau in Paris, the Washington DC National Gallery of Art and the New York Miller Theater. She has performed as a soloist with such leading orchestras as Dresden Staatskapelle, Philharmonia Orchestra, English Chamber Orchestra, Royal Philharmonic, Japan Philharmonic, Munich Radio Symphony, St Petersburg Philharmonic, Tokyo Symphony, Warsaw Philharmonic and Vienna Symphony Orchestras. Conductors with which she has performed include Vladimir Ashkenazy, Erich Bergel, Michael Boder, Andrey Boreyko, Jorg Faerber, Vladimir Fedoseyev, Edward Gardner, Neeme Jarvi, Emmanuel Krivine, Ingo Metzmacher, Esa-Pekka Salonen, Jose Serebrier, Vassily Sinaisky, Stanislaw Wislocki and Lothar Zagrosek. Ms. Onay’s many festival appearances include Berlin, Warsaw, Granada, Mozartfest Würzburg, Newport, Schleswig-Holstein and Istanbul.
Cambridge-based Turkish State Artist, UNICEF Goodwill Ambassador, in high demand for her unique and sensuous Chopin, Saygun and Rachmaninoff interpretations ‒ pianist Gülsin Onay gave her 2000th concert in July at the 13th International Gümüşlük Classical Music Festival, where she has been Artistic Advisor since its foundation.
In 2015-2016 season, she played in major concert halls and festivals of Turkey and was warmly welcomed in cities worldwide: Luxembourg, Münster, Qatar, Paris, London, Cambridge, Sao Paulo, Brasil, Tokyo and New York. Her season also featured world premieres, masterclasses, charity and fund raising concerts.
In 2017 Gülsin Onay celebrates the 110th birth anniversary of her teacher and lifetime mentor, the world-acclaimed Turkish composer Ahmed Adnan Saygun, with special concerts and premieres worldwide. Onay played his 1st piano concerto in the 45th Hong Festival with BIFO, under Sascha Goetzel. She repeated the piece in May with Göttingen Symphoniker under Kevin Griffiths.
An exceptional Chopin interpreter, Gülsin Onay was in 2007 honoured with the award of a State Medal by the Polish nation. She is also acknowledged worldwide as the finest interpreter of the music of A.Adnan Saygun, whose works feature prominently in her concerts and recordings, and whose 2nd Piano Concerto (which she has premiered in Turkey and abroad) was dedicated to her. Other contemporary composers who have dedicated works to Gülsin Onay are Hubert Stuppner, Denis Dufour, Jean-Louis Petit, Muhiddin Dürrüoğlu-Demiriz, Marc-André Hamelin and Bujor Hoinic. Gülsin Onay has also given world premieres of concertos by Stuppner, Tabakov and Hoinic.
Gülsin Onay holds the titles of State Artist in her native Turkey, and of soloist for the Presidential Symphony Orchestra in Ankara. She is “Artist in Residence” at Bilkent University in Ankara and holds an honorary doctorate degrees from Bosphorus University in Istanbul, and from Hacettepe University in Ankara. The Sevda-Cenap And Music Foundation awarded its prestigious 2007 Honorary Award Gold Medal to Gülsin Onay, and she was named “Pianist of the Year” in the 2011 Donizetti Classical Music Awards. In 2014 she was awarded the Honorary Medal of the 42nd Istanbul Music Festival. For the last 2 years the Turkish city of Tekirdağ, which has named one of its streets after Gülsin Onay, has held a concert series “Gülsin Onay Piano Days” in her honour.
“An exceptional pianist, endowed with virtuosic brilliance and boundless energy, and an interpretive power both intelligent and emotionally sensitive”, Gülsin Onay has recorded 20 albums that illustrate the breadth of her repertoire as well as her interpretive power. Her 2007 CD featuring live concert recordings of Tchaikovsky’s 1st and Rachmaninov’s 3rd Piano Concerto, has been acclaimed by critics and virtuosi alike. In 2008 CPO released her recording of both Saygun concertos, to widespread critical acclaim. The American label VAI has released a live DVD of her performances of the Grieg Concerto and the Saint-Saens 2nd Concerto. Her recital of Haydn, Liszt and Schubert is on the Dorian Sono Luminus label. Many of Onay’s concerts have been broadcast on European radio and television, and in the USA on National Public Radio. Her latest album “Night Music” features pieces by Beethoven, Chopin, Debussy and Ravel, as well as a wonderful rarity: Elgar’s “In Smyrna”, inspired by his visit to Izmir in 1905.
Gülsin Onay takes a special interest in the promotion of charitable causes, giving charity concerts around the world – most recently for children in Lebanon, under the auspices of UNICEF, whose Turkish National Committee appointed her “Goodwill Ambassador” in 2003. Since its inception in 2004, Gülsin Onay has been the artistic advisor of the Gümüşlük Classical Music Festival.
Gülsin Onay started her piano education when she was three and gave her first public recital on Turkish Radio when she was only six. With the aid of a special state scholarship she studied with Ahmed Adnan Saygun and Mithat Fenmen, and subsequently at the Paris Conservatoire, from where she graduated at the age of 16, winning the prestigious “Premier Prix du Piano”. Prizes in top international competitions, including the Marguerite Long-Jacques Thibaud (in Paris) and the Ferruccio Busoni (in Bolzano), quickly followed.